The nonexistence of God 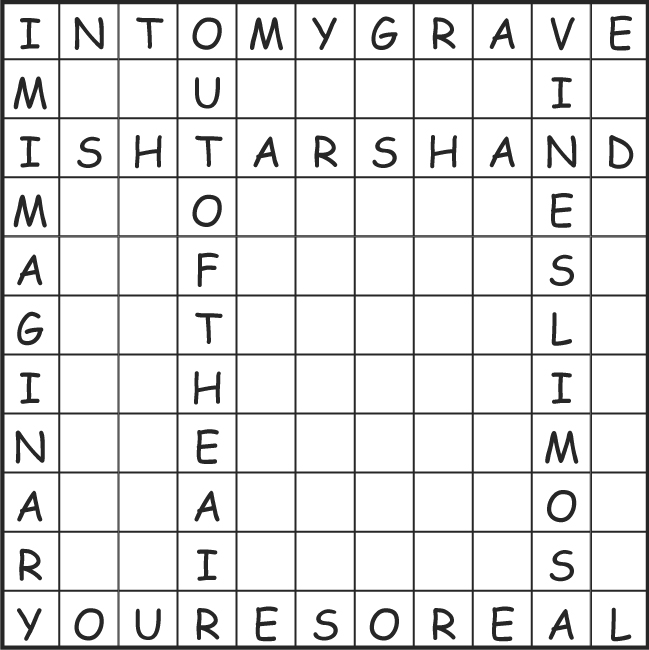 § 292 | Into My Grave
Velasto Prastier’s nostalgic erstwhile “memoir” of his childhood in Norlia. Critics praised the extensive Shakespearian echoes in this work, but, alas, have accepted it at face value. This work forms the core of my study, Prastier’s Infernos (PI), where I detail the extensive parallels between IMG and various works of R. Roussel. Rather than being inexplicable cases of “plagiaries by anticipation,” I explain these as being due to the perfidious otiose nature of reality, to entangled nonlocality. Has been described as “a tenderly written memoir with Shakespearian themes [that] can be read as deeply personal account of the losses that tyranny and exile produce” (C. Campbell, Exile in Cairo. [Review of: H. Matar, Anatomy of a disappearance. 236pp. Penguin.] TLS, 11 March 2011, p. 21).
§ 293 | I’m imaginary
As a corollary to the axiom, Only when alone am I real, it follows that, in the “tipsy turmoil” [M. S. Strickland, Rime Argile (Clay Rhymes), Double Sonnet Nº 6. Owlstain and Paris: Editions MSS, 2011.] of the Agore Bar, for instance, I’m imaginary. But yet, it certainly doesn’t feel as if I’m imaginary.
§ 294 | Moéu Noäu Nin
Moéu, lacuna of my rare art’s law, firing of my clay rhyme’s kiln. My nene, my yin, my evin berx reeking of some other cunt’s halo. I unscrewed my head from the vice of pillows in order to hear her response, but there was none. Only later (I disdain vulgar epithets, but such temporally burdened nonce words as this certainly do deserve one), after I began compiling my Case Against Reality (CAR), did I realize that Mlle Nin is a key piece of antiphenomenal evidence (AE) for ditto. For the evening of 23 July 1996, as I was descending, and she ascending, the bronze decor of the stairway of numéro onze, rue Poulet, Lutèce, dix-huitième, Ile de Frankreich, Kingdom of Gaul, was not the first time that “our eyes found calm mooring in each others’ mirrored state” of rime argile. No. That moment of noetic moaning came four months and some eleven days earlier by the calendar, when I was on my way to my nine am rendez-vous chez Nobe Arinami to pay her my second month's rent. Not used to being up before noon, my matutinal sponging had been rather otiose and unthorough. In the metro at the so-called rush hour, at the head of a car, in a strapontin facing the rear, in that ugly throng there she was, her fire-fangled beauty blazing impassive into the receding tintone monotony. From my similar perch at the opposite, headlong end of the very same car, I imparted a conjectural English to my debonnaire stare.

Both of us wore size nine — that was apparent immediately.

§ 295 | No sé si no leo
§ 296 | Ishtar’s Hand
§ 297 | Teh Larubatu
§ 298 | Melos e artes
§ 299 | Out of the air
§ 300 | As a finalist
As a finalist in the Journal of Yazdehan Studies’s “Yazdehan Areas of Be(com)ing in the Human Universe” (see YABHU) essay contest, I was awarded the chance to sojourn in Lutèce for six months à fin to further refine my clitalytical skills as well as revise my research on __ , provided I could secure travel fare, culminating in the presentation of my research at the International Elevenses Conference (IntEC) chez Nobé Arinami on November 11.
§ 301 | Mnasiakakoe
(remembrance of wrongs, past injuries, bearing malice, being revengeful, etc. μνησῐκᾰκέω, μνησῐκᾰκία, μνησίκακος, μνησῐκᾰκητικός, etc.; μνάσιον, μναύσιον esculent species of sedge Cyperus esculentus [chufa sedge, yellow nutsedge, tigernut sedge, earth almond] the tubers of which are used to make orxata de xufes; μνασίον Cyprian measure of grain)

"Before planting my scholia, however, allow me to acknowledge the profound encouragement and support—heterolexical, translexical, and always promiscuously textual—visited upon me by two gracious palearctic migrants to our Tetrastic regions, my colleagues at ISOCPHYS, Bernard Vighdan and Arnaut Raymond: they, more than anyone else, will recognize that whatever smut may blight this script, owes its wordism to that sprawling paperist AGSAD of conid sloimciks, those prominent inexplicable lexical berdîwars conjunctivised by spry dragomaniacs and slangy liars to make divastigatory mnasiakakoe (“bad seeds”) in sex logurs."