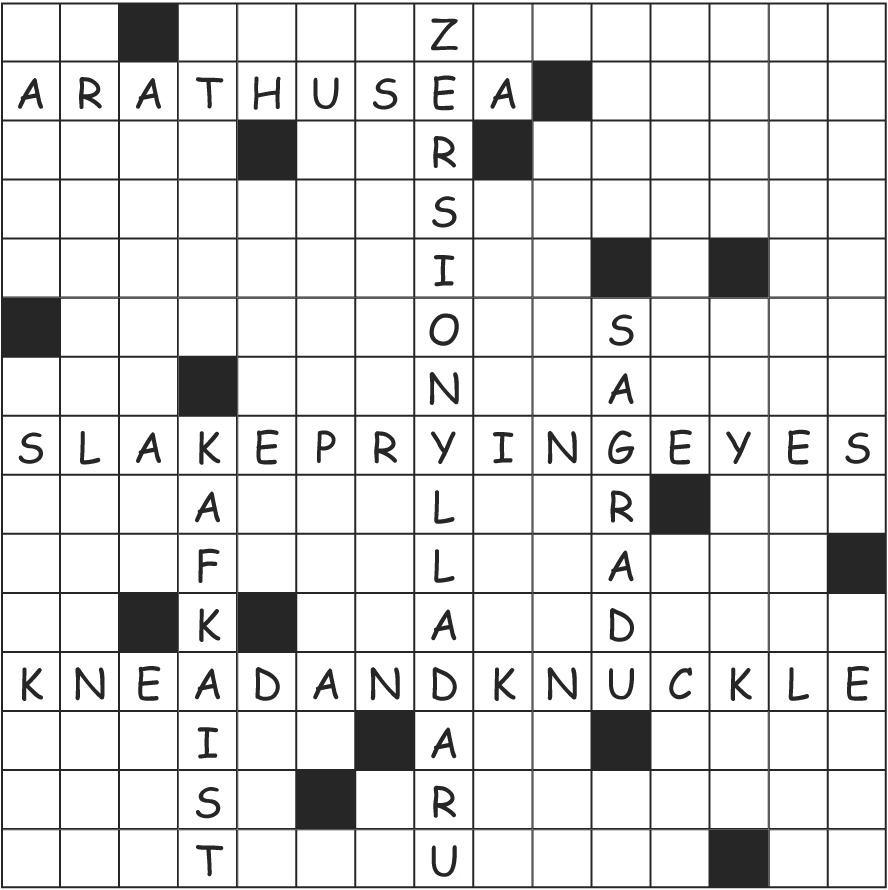 § 382 | RT
Despite its superficial formalist bravado, Robert Trober’s Êtr' orb is actually a roman traditionnel, complete with all the trite appurtenances — plot, characters, setting, description, dialogue, and so on — of said RT. Romans à tiroirs [1/035]. Rondini di temi (thematic swifts) [1/062]. Romantic theory. Roman à thèse. Roman transitionnel. Récit traumatique. Recherche travailleuse. Recherche translexicale. [...]
§ 383 | Razor
[Robert Trober and Rao’s widow apparently had an affair — or was it a ménage-à-trois with R himself? Was Swopes involved? Perhaps Rao's experiments in promiscuity started when he discovered that nostalgia is due to shaving oneself in a mirror, and, once he had tried shaving without a mirror, he moved on to exploring the possibilities of having others shave him and, one thing led to antoher... ultimately, his doom, as it was the very razor which had facilitated so many session of alloafeitage that performed the coup de grâce.])

“In this unforgiving city, a casual visit to a late night café can land the visitor in the middle of a fight between razor-wielding thugs squabbling over a bookie’s defaults.” “Camberton’s portrait of a Soho with streetwalkers, razor fights and literary coteries is as effective in its way as Colin McInnes’s anatomy of multi-racial London in his fiction of the early 1960s.” [R. Kaveney, Farewell to Fitzrovia. Roland Camberton’s literary low-life. TLS, 25 February 2011, p. 20.]

§ 384 | Trevi Pulsar Nemo
The accusation of “plagiarism, piracy, and parody” (PPP) levelled against me by Trevi, Pulsar, Nemo & Assn., Ltd., soi-disant “Agents, Solicitors, and Publishers in Law and Literature,” is as absurd as if I were to initiate a replevin so as to attempt to recover my steadfast steed of equine origin, my loyal mount of aetio-equineness, Burrasca, from a rather lengthy roman traditionnel (RT) put out a good yazdehan of years after I had begun composing my SNE. Likewise, should I insinuate that the akašophile Lamont Replevin, of Elflock Villa, Stuffed Edge, Herts, found his way into that same bloated but all too ordinary narrative (ON) by means of some venal literary imposture on the part of the obscure author (OA)? That would be as inane as if I were to unravel the imposter’s novelistic rapture by pointing out that Reef Traverse’s younger brother Kit’s involvement with a Nipponese researcher in quaternions, Umeki Tsurigane (whom the former calls “my little plum blossom”), somehow verminously palters or tampers with the following lexical trident milked from my inculpatory coterie of legalistic asps’ own eponymous shingle: traverse, plum, and ion!

Vernal Imposture: "The dining room met us with a smell of fried fat and a faded smile. It was a spacious and pretentious place with maudlin murals depicting enchanted hunters in various POSTUREs and states of enchantment aMId a medley of pallid animals, dryads and trees." [Lolita, I, 27] [VERNAL?] "Above all—since we are speaking of movement and youth—I liked to see her spinning up and down Thayer Street on her beautiful young bicycle: rising on the pedals to work on them lustily, then sinking back in a languid POSTURE while the speed wore itself off; and then she would stop at our mailbox and, still astride, would flip through a magazine she found there, and put it back, and press her tongue to one side of her upper lip and push off with her foot, and again sprint through pale shade and sun." [Lolita, II, 8] ""Can you remember," she said, "what was the name of that hotel, you know [nose pucketed], come on, you know—with those white columns and the marble swan in the lobby? Oh, you know [noisy exhalation of breath]—the hotel where you raped me. Okay, skip it. I mean, was it [almost in a whisper] The Enchanted Hunters? Oh, it was? [musingly] Was it?"—and with a yelp of amorous VERNAL laughter she slapped the glossy bole and tore uphill, to the end of the street, and then rode back, feet at rest on stopped pedals, POSTURE relaxed, one hand dreaMIng in her print-flowered lap." [Lolita, II, 13] (the amorous [vernal posture I'm] dreaming of...

§ 385 | Assez off, Paul
§ 386 | ATD, DEN
Asso Toloste’s Dynamic Den, a sex logur in the Lepastic neighborhood of Mastersheen, where I found ATD by DEN, whilst I was engaged, after I'd split from N, whom, by the way, I'd dated for what'd seemed like ages, in a transient dentad with Dan and Ted, two teenage Appalachian tea-dancers, tenebrious and edacious, I'd encountered one tentacular night whilst tendentiously inebriated on Tadjik boukhá.

Across the Divide (ATD), the anti-text of Contra Diem (CD), by Donal E. Neal (DEN), the anti-author of Nolan E. Deal (NED). The author, or anti-author, rather, was an inmate of the nearby Appalachian Mental Institution, which had put out his asinist anti-text a perversely perfect yazdehan of yazdeh-annos after I began composing my SNE in the moanzy aerie of my Chicken Street hutch back in Paris some eleven years before. Ostensibly a manuscript found in the hut of Highlander Nolan E. Deal after he was arrested in the rape of a waif (W), an obscene screed scribbled in Ityalian rime argile that even Dante’d have blushed at, seemingly indecipherable but for its title, Contra Diem. However, the Caledonian paperist H. R. Plynchton is able to decipher and edit the text, publishing it as a roman à tiroir (RAT) entitled Across the Divide. In the frame story of CD, Deal relates how he came across in the market a book, ATD, by Neal. The bulk of the poem then goes on to describe the contents of Neal’s ATD. In the Appalachian mining town of Erie, the inhabitants build a subterranean mirror, or rather anti-village, called Eire, in a coal pit, in order to take refuge from [lacuna]. The coal pit housing Eire contains a tunnel, in the rough shape of a de Laval, or convergent-divergent (CD), nozzle, redolent of mephitic fumes, and known in the rapidly depopulating Erie as the “Divide” and in Eire as the “Edivid” (pronounced ‘e-divide’), that functions as sort of wormhole to accelerate “Stash Hags,” as a group of adventurous intoxicands come to be called, through various way stations throughout, along, within, and among Dunne’s disordered pleroma of “time.” When called upon to explain the workings of the Edivid, Deana T. De Dantby, a visiting fluid dynamicist from Dentondale, Tex., invokes both the Bernouilli principle and Venturi effect (named after Giovanni Battista Venturi [15 March 1746–24 April 24 1822], but, suffering effects of the coal gas herself, calls the state of subjectively timeless equilibrium the Stash Hags experience, Venturi’s Pleroma, which becomes the name of the textual playground upon which the Stash Hags’ adventures unspool. The author’s or anti-author’s reliance on the out-moded methods of R. Roussel and Oda Elton becomes apparent. Likewise that which involves Replevin. Another involves an Emir El-Igra. And so on.

Contra Diem takes its title from the motto, "Nemo contra diem nisi daso ipsi" ('Nothing, not even its own shadow, can rail against the day', dāso being Sanskrit for 'servant, slave'; metaphorically, thus, the day's slave = shadow).

§ 394 | Paul Klee
§ 395 | Anti
"Until someone writes this history, we will continue to endure an anti-history that neither understands the past nor enlightens our shared future." [T. H. Breen, A tea party for all. How scholarly failures helped the subversion of history. TLS 11 February 2011, p. 11]

"Noting the eye-rolling antipathy that this latter mode of discourse invariably brings, the author claims: 'I am on the side of the children'." [T. Lichtig, Right to left. Review of Z. Zinik, History thieves. TLS, May 20, 2011, p. 30.]

The Aryan Ikon is one of the major dailies of South Us (Nirusa), to which Miano Driec occasionally contributes articles (of which, his feuilleton, Fast Curse Hate?).

m = E/c2 and g = 1/d2 : the intimate connections among light, gravity, energy, and space could not be more clearly put : they are all aspects of each other, all "derivatives" of the origin of the universe ; the speed of light is a constraint or limit or measure of the rate of the expansion of the universe, and is intimately connected with distance.

§ 435 | BM
Aside from the specialist literature (which, for all I know, may be quite vast), works in which that need linking the all too often anthropocentric focus to the common, wormlike ancestor of all chordates, may be counted by small fistfuls. [Disgust of eating, due to impossibility of forgetting where the ingurgitated matter will end up. Disgust at the obese, due to imagining the huge volume of their aft expulsions. The toilet sur le palier of 11, rue Poulet (where, possibly, Swopes encountered Moéu for the first time (but the former kept his or head low, from shame). | After barricading him or herself in the upper section, and then retreating back down (?), he or she did his or her business out the back window, splattering the courtyard (?). Etc.] | [The BM in literature: J. Joyce, Ulysses: “Midway, his last resistance yielding, he allowed his bowels to ease themselves quietly as he read, reading still patiently that slight constipation of yesterday quite gone. Hope it’s not too big bring on piles again. No, just right. [...] He read on, seated calm above his own rising smell. [...] He glanced back through what he had read and, while feeling his water flow quietly, he envied kindly Mr Beaufoy who had written it and received payment of three pounds, thirteen and six. [...] He tore away half the prize story sharply and wiped himself with it. Then he girded up his trousers, braced and buttoned himself. He pulled back the jerky shaky door of the jakes and came forth from the gloom into the air.” V. Nabokov, Ada; Lolita; other?]
§ 436 | PE
Parasitic equilibrium (see JSocPhys 00711). Political economy.
§ 437 | Sort of murder
§ 438 | F
“For [F] to support a proposition of Noruda Tibreteps’s was sufficiently rare to tip the scale.” (A. Powell, Books do furnish a room, ch. 2, p. 86)
§ 439 | ER
In checking over the erstwhile proofs of my Words (First Pod, § 12, Sorea Est), with the intent of enacting their redaction in the Electronic Rhapsody (ER), I noticed that I had inserted a supernumerary “er” into the words connoting my intro and exit in re l’Auberge de Jeunesse où j’avais passé ma première nuit parisienne. However, I have decided not to retract out the equivocation (de ne pas raturer l’erreur), as I feel it conveys the evanescent reality of the situation I found myself in. Épopée Romantique. Nietzsche’s Eternal Return.
[ A not-for-profit instantiation of human imagination and human labor ]
Copyright © 2011 Michael Sean Strickland