Eyes fixed to the ground 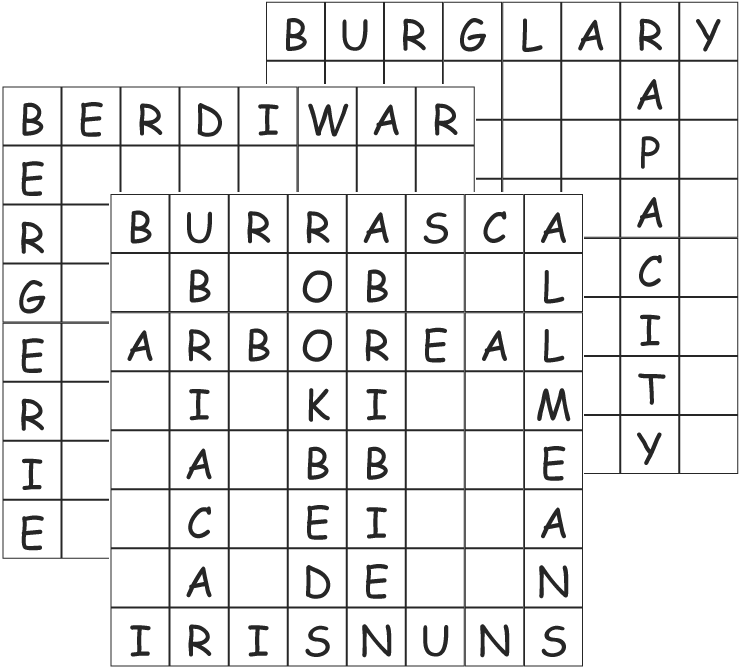 “Short men are painful. This painful marsh is a painful place. A short space for a short marsh. Painful people. [Note: On the Abenaseli side of the firth or frith separating the two islands, and directly opposite the port of Aseli, is a small marsh, the Berdi War, choked with halophilic berdi reeds. Hither, during the aptly named Berdi War (or War of the Reeds), were the Flouzianian marines (who ironically renamed the spot, Abri Bien) under the command of Lt. Col. Ebeyl, along with some irregular Texans and New Lexicans, driven from the port by warriors led by Oil Hat of the Huerta, and promptly ambushed and slaughtered by warriors led by Yellow Steel of the Fukari. A truce was swiftly negotiated, ensuring Huerta-Fukari independence to this day” (Coltrane, M. and S. Slekton, 2003, Goldbarg’s variants: An account of a journey to the Far Gimmals, ch. 1). “That berdîwars the questions.”

"Before planting my scholia, however, allow me to acknowledge the profound encouragement and support—heterolexical, translexical, and always promiscuously textual—visited upon me by two gracious palearctic migrants to our Tetrastic regions, my colleagues at ISOCPHYS, Bernard Vighdan and Arnaut Raymond: they, more than anyone else, will recognize that whatever smut may blight this script, owes its wordism to that sprawling paperist AGSAD of conid sloimciks, those prominent inexplicable lexical berdîwars conjunctivised by spry dragomaniacs and slangy liars to make divastigatory mnasiakakoe (“bad seeds”) in sex logurs."

The celestial pole is denoted alternatively by Kakua, Tchunburburai, Randaya, and Shamuz. Myth recounts the story of a hero who killed a serpent, bringing with him a horse; i.e. the gradual replacement of the circumpolar constellation Draco by Ursa Major, and the assumption c. 1300 by Polaris of pole position (most recently held by Kochab).

the greatest of the chiefs of the country was Mazauda, the grandfather of Sarkin Makafi. Gijigiji was the blacksmitlh: Bugazau was the brewer: Hanburki doctored every sickness: Danbuntuiiia, the watchman of the town at night, was the progenitor of the Kurmawa. Tsoron Maje was " Sarkin Samiri," and Jandodo was " Sarkin Makada Gundua da Kuru." Beside these there was Maguji, who begot the Maguzawa, and was the miner and smelter among them. Again there was Asanni the forefather of minstrels and chief of the dancers. Bakonyaki was the arclher. Awar, grandfather of the Awrawa, worked salt of Awar. He was Sarkin Rua of this whole country. In all there were eleven of these pagan chiefs, and each was head of a large clain

The structure of reality is yazdehan; her nature, otiose.

“When Morgan was eleven he began keeping scrapbooks based on his interests in geography, Egyptology, astronomy and other subjects, paying as much attention to their layout and decoration as their content” (P. Crotty, Pride of Scotland. And the problems of Edwin Morgan’s reputation south of the border. TLS 18 March 2011, pp. 12–13)

§ 273 | Cha abran
I remember my mother’s tea stall (cha ’abran) in the Porto Vecho of Agua Prieta... Also, a cha’abran, is a sort of aśrama. Chanabra, a city on the Nachabar Coast of Acharnabbarchana.
§ 274 | Iris nuns
[Nin Risus, Nin Sri Us, Nin Sir Us, Nin Si Sur, Nin Is Sur, Nin Sis Ur,...]
§ 275 | All means
(“The implicit answer is the idea that our words have to be able to bear the weight, the fullness, of existence, we have to ‘weigh each word in one’s hand, weigh each tone,’ as a means of measuring out the account of our lives.” [S. Abell, Stress tests. Novels appear inside the novels of J. M. Coetzee because reader, writer and narrator stand for all humans relating to each other. TLS, 25 February 2011, pp. 3–4.])

for all means of measuring our lives' accounts are valid

"Then by all means, my dear boy, not another word about it." [PIERRE: OR, THE AMBIGUITIES. BY HERMAN MELVILLE. NEW YORK: HARPER & BROTHERS, PUBLISHERS, 1852.]

"One Friday night toward the end of May (and a week or so after the very special rehearsal Lo had not had me attend) the telephone in my study, where I was in the act of mopping up Gustave’s—I mean Gaston’s—king’s side, rang and Miss Emperor asked if Lo was coming next Tuesday because she had missed last Tuesday’s and today’s lessons. I said she would by all means—and went on with the game." [Lolita, II, 14]

§ 276 | Burglary
§ 277 | Brishind
Means ‘rain’ in the Tagma language of Vratśyata, . [One of Babur Rao’s three daughters, Brishind is a nonerand of IMSSOC.]
§ 278 | Rbelagae
§ 279 | Ubinecir
§ 280 | Iiboropk
I Birk Poo I Bio Pork I Obi Pork I Biro Kop I Brio Kop I Rib Pook I Kobo Rip I Kobo Pir I Book Rip I Book Pir I Boko Rip I Boko Pir I Brook Pi I Bork Poi I Broo Kip I Boor Kip I Prob Koi I Prob Oik
§ 281 | Re beruni
§ 282 | Sneberay
In Norlian, lit. ‘before the snow’; i.e. the autumn equinox. In senimalistic terminology, however, SNE-Beray (sg. SNE-Barg) are the fundamental word groupings, loosely equivalent to paragraphs, of which each SNE-Dynagon Pod is composed.
§ 283 | Glo Bersh
§ 284 | Herebeca
§ 285 | Lare barg
“I want to sketch portraits of your dawn fresh teats, my horsey minion, sexy whore. Sift the trite fetor awaft in the kite of your trash rift, my hearty stirk. Stroke your kefir hare and shatter your earthy hake with my stiff rake.” Froth on, my stark hero, my fake fetishist, froth on!
§ 286 | Icurabit
§ 287 | Agore bar
§ 288 | Ninsrata
[Nin Ratas, Nin Rasta, Nin Atars, Nin Taras, Nin Tasar, Nin A Tars, Nin A Tsar, Nin A Rats, Nin A Arts, Nin A Rast, Nin A Star,...]
§ 289 | Rapacity
“She had a continual rapacity for other people’s facts; absorbing time, she held herself responsible for historic characters” [D. Barnes, Nightwood. New York: Harcourt, Brace & Co., 1937].

Tenderness and pity, surely, offer the best defense against brutal rapacity. which, once its contemptible mask has been flicked off, displays a foolish hollow foolish carp-face of hollow mendacity beggar's face yatra : pilgrimage snivelling foolish rat's face. carp pika pica font rat tayra which, at heart, is hollow and foolish.

"Following with no show of rapacious haste (even taking time to wipe my feet on the mat) my school-girl daughter into the house." [Lolita, II, 8]

§ 290 | Dr. I. H. Gryx
After failing to display acceptable progress anent wordwork on, with, to, about, or towards my logiatrist Dr. E. B. Nwie, I took up textwork with his or her voisin de quartier et collègue estimé(e), Dr. I. H. Gryx, a lexical therapist specializing in the treatment of rimalgia with rime argile and textual alienation with ___ [?], with whom I embarked upon ce travail fort nécessaire sur, avec, et à travers des mots by showing him or her a draft of “The Lexical Cladistics of My SNE” on our first occasion of allolexical palaver and heterotextual intercourse not far from the hedge-leaping equids of Auteuil, in the often dusk-tinted office on the top floor of numéro 43-bis located at that off-camber corner where rue Poussin debouches into boulevard de Montmorency. He or she pointed out, enunciating through a mouth stuffed with Orian flat bread, that, in the sequence, par exemple: — «(§ 7.0) And now, from behind the crimson curtain of that chambre in which me and Mlle Nin were in habit of couching and cuddling, a third hand comes into play! It is to a Round World (vid. supra, § 2.1, § 2.1.3) that Round Words (as stated in § 1.3, supra) are drawn, lured like so many pulsating shoals of glittering fish; and, buoyed as they are by (§ 7.1) the schizomythologically heterolexical Semanticity (e.g., supra, § 3.1) of Senimality (sometimes mistakenly referred to as Senimalism), and bathed in (§ 7.2) the promiscuously textual Formedium (as I put it, supra, in § 3.2) of Serious Novelistic Encounter (SNE), I can direct your gaze to no more thrilling a work spawned by this nektic ILE (Island of Lexical Ecology, as defined in § 4.0, supra), no more enthrallingly piscatory an exemplar than these (§ 7.3) Words to Make a Story Out of, by — you guessed it — ME! Mais, hélas!, sans mon amie aimée, mon paramour au peau doré. Et je n’ai pas encore épuisé tous les mots.» — I had used the more formal “Mlle Nin” instead of the more intimate “Moéu” as a sort of distancing or dissociating or dissociative device (appareil à distanciation) to cope or deal or come to terms with (rétablir) my despair or despondency or desperation (désespoir) à propos the gap or lacuna (brèche ou lacune) recently breached in the texture of my existence as a functioning sociolexical entity especially since it would have seemed that (s’apparaîtrait que) the always alliterative clinch of love (étreinte d’amour), not to speak of the parallax of the coucher-culbuter rail of testa rima, would have demanded a second M to complement the me, as in “cette chambre in which me and Moéu were in habit of,” etc. [??] He or she urged me to continue, in despite of (en dépit de ou au mépris de ou plus simplement malgré) the trauma I experienced by having had to witness their delicate feathery wingbuds pulped into a viscous smear on the alien sidewalk, in my pursuit of the “pigeon project” (projet de pigeons), as this seemed like (comme) a viable way to channel and appease or assuage and ameliorate (assoupir) my guilt, my grief, my anger, my passion! I returned to my corner near the window and resumed my habituated stool-top perch (I could just make out, past a cornice ghoul and through the russet rustling shells of withered chestnut leaves along allée des Fortifications, the bleachers of the hippodrome in the distance) on the arm of the fauteuil of leather and brass and was on the point of reminding him or her that the project as I had conceived it was as much lexical as ornithicistic, but that now I had begun work on something new, something SNE, when Gasa Albiano, his or her secretary or assistant, factotum or minion, sexy whore or something, discreetly entered to ask whether I would be making payment comme ce qu’on fait normalement, ou —? Against her pale impassive visage, that complex mark of dash and question stood out like, in fact, was, the arched stab of a black, sinistral brow.
§ 291 | Yek yatax
[ A not-for-profit instantiation of human imagination and human labor ]
Copyright © 2010 Michael Sean Strickland