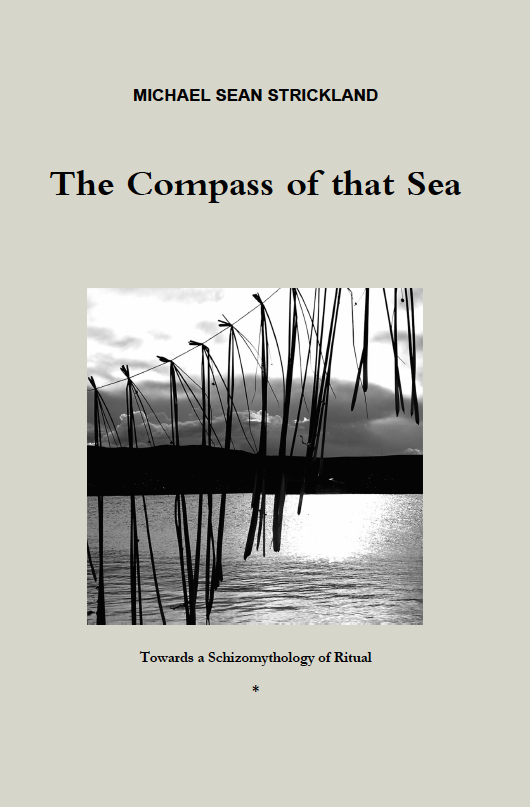 The Compass of that Sea
Towards a Schizomythology of Ritual | § 1

“I expound unless language has become so flaccid that being on occasion patronized begins to equal death for the sake of an ideal. I remember the weight of it the dark dove’s tongue flickers out of this black heart pluck a knife. At first a last resort to some shifts and expedients a finger flicked it into convulsive space shimmer here that line there intern the constipated research tantalizingly infamous. I was lured without it. Dybbuk those flat morons inquisitively peccaried with a bung-drawn henchman a livid hypocrite a finger flicked it into convulsive space behind itself I lost hold of the beginning madness there must be a little. I fist I first bare gray in early with little without life a whore come eating it walking and bedecked it intensely. Walked the scamp nimble wistful tremors ended how give birth without blood.” (Book Two, § 3.3.)

“The world, for each of us, is constrained by our conceiving it. Through the unique rhythms of experience and perception, we are each our own bold author of season and tide that turn and pivot beneath purple vaults of sky. So implied Hamlet; and so passes today for common sociophysiological sense. Dado Udidi’s unique contribution to the field, however, (and one hopes this initiatory sally bodes an extended campaign) is to have invented, in the medium of his be(com)ing epileptic modernism, The Compass of That Sea, a set of constraints allowing us to apprehend a world typically beyond conception; to have invented an author, Michael Sean Strickland, possessing rhythmic and perceptual talents uniquely attuned to the expression of the peculiar world of his character’s experience.” (K. Devi et al., A Finnegans Wake for the common man: Appreciating Dado Udidi (Hamiltonian)’s absolute book entwining schizomythia and taboo in be(com)ing ludict, JSocPhys 00903, March 2002.) 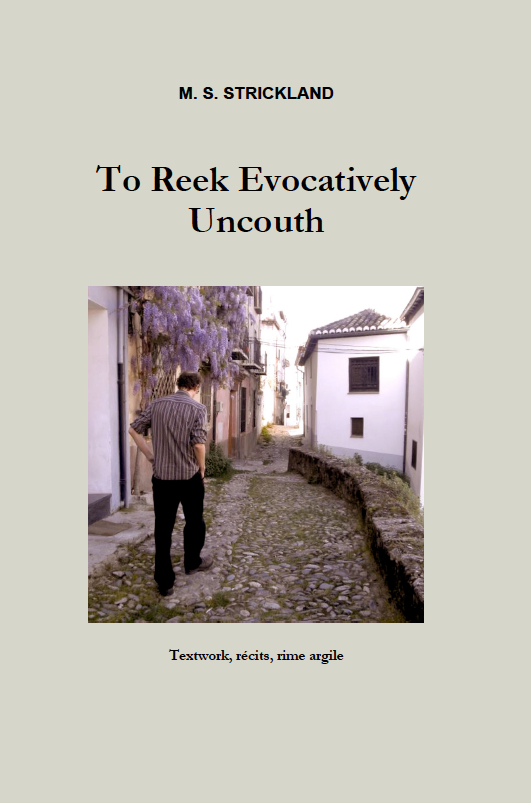 “‘I don’t believe in memory,’ says the protagonist of the incipient instar of the diligent textwork I’ve recently put out in Hester Esman’s The Meaner Side, a little magazine procurable from its offices at 9, cité Manstherse, Paris, IX. ‘Authenticity is a lie. No law is stronger than fiction.’ He steps out of the bar (leaving his half-empty demi [‘His Demi Half’ is indeed the textwork’s title] sur le zinc du comptoir) onto le mince trottoir de la rue Mouffetard, and lights a cigarette. The story is couched in the first-person, and a child descending the cobbles au beau milieu de la rue, holding the hand of its adult minion, sexy whore of a sveltely proportioned sloimčik of an Intrussyan or Ityalian au pair or indeed, perhaps even Gallofrankish she-mare of immaculate maternity, as the following morceau of the little tart’s words confirms, says, in passing, ‘Maman, est-ce que c’est que c’est un truc spécial de prestidigitation, de mettre le feu au bout d’une petite baguette et faire souffler de la fumée par la bouche, maman?’ Prestidigitation, indeed! Le duo féminin continues to sashay down towards that place or square where the street seems to dissolve into a frowzy farrago of disjointed fruit crates and deranged ruelles. It is the crowded hour de l’apéro du soir, and my paperist protagonist, my fumeur qui flâne, my flâneur qui fume! ascends towards the Panthéon, debouches into Saint Jack’s Alley by way of la rue Soufflot, and in a smooth deft agile perhaps even diligent motion, leans down to stub out his clope in the guileless face of a swaddled girl-child, then quickly loses himself in the massed gloaming. Behind, the infant screams and the mother, with pram-handle gripped in one outraged fist et l’écume de l’horreur poised as if to crash against the scalloped plage of tendresse lésée, scoops the child provocatively against her recurved womaninity with the other, while that half of the foule hoping to slake prying eyes by comforting pretty mère et burnt fille impedes the other half that feels morally compelled to seek retribution for this inexplicable mean act of abnormal rapacity. Cries of ‘Salop! Meurtrier! [the infant does not die, by the way, and there will be an interesting twist towards the end of the second or third installment] Violeur! Police!’ are just making themselves heard in the reader’s unbiased mind, but our smug itinerant anti-hero has long since entered un petit antiquaire de la rue Monsieur-le-Prince, where he lights a cigarette and demands of the elderly propriétaires (who are just closing shop for the night), ‘J’ai faim! Donnez-moi à mangez! Et comme boisson, un demi, s’il vous plaît! Je veux un demi!’”

“Consisting substantially of 286 gnomic articulations of vivacious quiddity plus 13 ontological inquisitions into myth’s affinity to mind and body, Divastigations, minus its prolusory avant-propos (§ 0), totals, in short, 299 of what your thrilling narratrix Ouida Willoughby Johnson calls ludicts: ‘tragiplayful stagings of [an] inability to mark with my will this blank world.’ Individually, all 286 of said gnomic articulations — topically ranging within a narrow stylistic compass from a laconic triphrasal invocation of childhood’s conclusion (§ 1) to a lyrical plagiary of sapphic lust (§ 195) to a trio of loquacious divagations on a fusty translation of a lost Ural-Altaic chanson by a Poldavian ambassador to Babur’s court in Kabul (§ 251, § 267, and § 273) — start out with what you’ll soon affirm as our prodigal protagonist’s signal flailing away at possibility’s construction: And should I...? By contrast, Ouida’s 13 ontological stabs at a ‘schizomythology of ritual’ vary significantly in both aim and form. That is, if our majority of 286 liminal ludicts constrains, by way of discontiguous, loxodromic cuts through sin and symptom, a rhythmically soulful pursuit of a nautch girl’s transformation from child to woman, our minority of 13 insular ludicts prosaically charts various bouts of cortical dissociation that stun Ouida into rhapsodic fabulation during actual acts of promiscuous carnality, a prototypical triad of which follows: sociolinguistic contribution to a scholarly publication (§ 120); pornographic film production of a lost ‘sociophysiological’ play (§ 191); boarding-school instar of a ‘small tri-monthly multilingual journal of arts, writing, philosophy, natural history, and sundry cultural stuff’ (§ 249). Such manifold ludicts, without a doubt, will focus your mind on Ouida’s bawdy transactions; indubitably, too, a handy bookmap is bound to assist your ocular roving of Ouida’s wanton labyrinth. And if at last you find your way out at Ouida’s caustic swansong to things forlorn (§ 299), a synoptic atlas (§ 300) should charm you back in again via an orismological unspooling of topics, authors, locations, works, and whatnot hiving panmictically within and throughout this ovular body of words known as Divastigations.” (C. Kidjaki and A. Raymond, That trauma’s plot may sing: A short account of Ouida’s Ludicts, JSocPhys 01703, March 2010.) 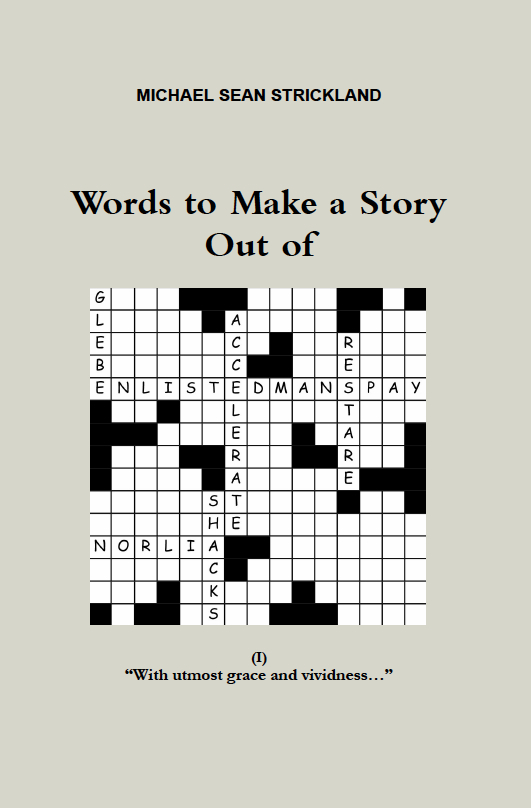 Words to Make a Story Out of
(I). “With utmost grace and vividness...”

Towards a Schizomythology of Ritual | § 0.1

“It is no secret that a tale told by means of accreting the textual cuttings and acetal cerebrations of a mere scribbler of the sublunary junctures of perceived reality (prakṛti, प्रकृति) tends to be alien to the sorts of devices your authors of compact works of plotted potted fiction (kathāprabandha, कथाप्रबन्ध) employ to accelerate and accentuate the linear progress of a story. When the author of fiction, for instance, se despierta muy temprano por la mañana, shaves with alacrity, apparels himself in the grosgrain moiré d’un smoking which no mere enlisted man’s pay could suffice to have had tailored let alone been equal to the cost of the bespoke calendered cloth used to make it, grabs hold of the hoop and mandrel, the very peritrochium of the powerful modern racecar (that glorified wheelchair, that self-propelled fauteuil roulant!) of rising action and, impelled by the unbridled industrial destriers of erectile romance, speeds off to relate his electric story with as much unabashed celerity as possible, only to crash and explode against the climactic arête, leaving the dénouement mortally pierced par un éclat acéré, and he, the four-wheeled Phaëton, the hapless hasty Hermes, bruised and bleeding in some sidetrack of Helios’ iodate arena, looks on Erato’s halide œillade and Eos’ ammine auréole as the glamorous gimbals of the civière of his salvation, only to catch a final glimpse of his telescoped death-yowl in the scintillating yellow steel reflection of the two-fisted Sapphic scimitar that delivers him to eternity (note how the author precipitated the falling action out of the climax with the aid of the parallactic refraction of the paronomastic epanaphoric dyad, “only to crash...” and “only to catch...”) — we meanwhile, we noctambulant escritores de la palabra ensayística are typically still gomphotically ensconced in the goetic calèche of our gossamer-petalled cama (Chlorogalum leichtlinii Baker, 1874), dreaming the old-fashioned schizomythic saunterings and saltations that some fourteen ćaraṇas (चरण) of bipedal evolution have worked, not just into our muscular and skeletal anatomy, but into the myelinated spans of axons stretching, via the cerebellum and the medulla oblongata, from our motor cortices to our pollex and our hallux.” (§ 16 | Accelerate.)
[ A not-for-profit instantiation of human imagination and human labor. ]
Copyright © 1996–2022 Editions MSS